During the 8th week of the year (February 19th to February 25th, 2018), at least 26 press releases were announced by companies working in Mexico, with five companies reporting quarterly and/or full year 2017 results. ON MEXICO ISSUES, no relevant news. ON EXPLORATION, In Sonora, Azure is to continue drilling its Sara Alicia Au-Co-Zn project; Evrim described the Sarape low sulfidation project. ON MINING, five companies, Starcore, Osisko Gold Royalties, Alio Gold, Argonaut Gold and Great Panther presented production results for the quarter and/or full year 2017.  ON FINANCING, Torex Gold announced an over-allotment of shares, taking the gross proceeds of its last offering to C$63.32 M. Evrim is accelerating the exercise of warrants that could add to up to $2.94 M. ON RESOURCES AND DEVELOPMENT, Pan American, Avino Silver and Alamos Gold presented resource estimate updates for its operating units to the end of 2017. Southern Silver Exploration presented an updated mineral resource estimate for its Cerro Las Minitas property in Durango. Endeavour presented an update on development of its El Compas project in Zacatecas. Silver Bull disclosed drill results from its Sierra Mojada property in Coahuila. Almaden Minerals released more infill drill results from its Tuligtic project in Puebla. ON DEALS AND CORPORATE ISSUES, Leagold announced the proposed take-over of Brio Gold, which owns a mine in Brazil. Bacanora Minerals is in the paperwork to move from the Canadian TSX to the British AIM stock exchange. Coeur Mining signed a LOI with Evrim on the acquisition of the El Sarape project in Sonora. Oroco Resource acquired interest on three concessions surrounding the Santo Tomas deposit in Sinaloa.

On the picture below, section on the San Rafael Mine, as seen at the museum of El Oro mining district in Estado de Mexico. 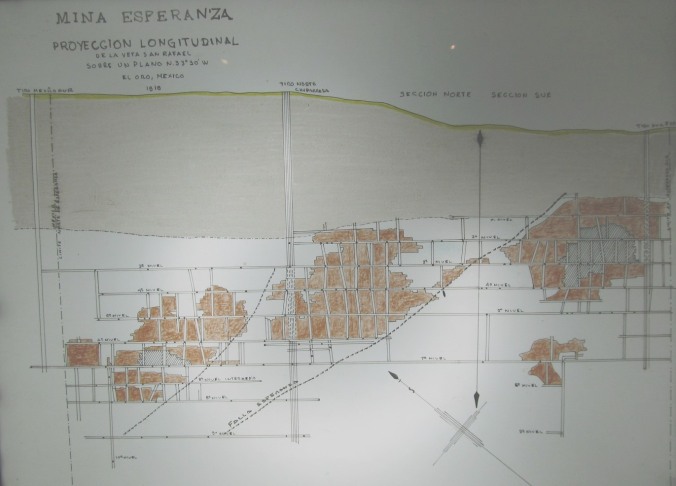