During the 20th week of the year (May 13th to May 19th, 2019), at least 34 press releases were announced by companies working in Mexico. ON MEXICO ISSUES, the Mexican government set the goal to reach $8 billion on mining investment annually. Fresnillo received an award for sustainable development.  ON EXPLORATION, In Chihuahua, Silver Spruce granted the contract for its drilling program at Pino de Plata. ON MINING, Mag Silver, Sierra Metals, Americas Silver, Great Panther, Consolidated Zinc, Starcore International and Fortuna Silver presented its first quarter 2019 financial and or operational results. Mexus Gold is hiring technical personnel for its Santa Elena mine and Fresnillo is setting logistic controls to prevent concentrate theft. ON FINANCING, Alien Metals raised £300 K, Orla Mining announced an early warrant incentive program for $4.2 M, Vangold raised $248 K, and Sable Resources $863 K. Almaden secured a gold loan for US$2 M from Almadex, First Mining raised $7.41 M . ON RESOURCES AND DEVELOPMENT, Fresnillo and Mag Silver approved the development of the Juanicipio mine in Zacatecas. Premier Gold released good exploration results at its Mercedes mine in Sonora. GoGold released results from two more drill holes at Los Ricos, Jalisco.  SilverCrest filed a PEA with good numbers from its Las Chispas property in Sonora.  Goldplay announced a 5,000 m drilling campaign at its San Marcial project in Sinaloa. ON DEALS AND CORPORATE ISSUES, Riverside signed a 2 year US$2 M exploration financing agreement with BHP for copper exploration in Sonora. Silver Spruce received $200 K for the sale of a property outside Mexico. Azure Minerals regains control from Teck of the Alacrán property in Sonora. Goldgroup Mining and Dyna Resources presented their stances respect litigation rulings relating to the San Jose de Gracia property in Sinaloa.

On the image below, quartz-chalcopyrite veinlet hosted by an intrusive rock in core from a project in Michoacan. Picture by Jorge Cirett.

Core images from Chesapeake’s Metates project in Durango have been added to the Mexican Core Shack. This core was exhibited in early April 2019, at the Discoveries Conference in Mazatlan.

Core from the Sirio project was displayed at PDAC 2019 in Toronto. This is a poprhyry copper style system drilled by ProDeMin.

During the 18th week of the year (April 29th to May 5th, 2019), at least 35 press releases were announced by companies working in Mexico. ON MEXICO ISSUES, Newmont Goldcorp Corp. informed on the intention to temporarily suspend operations at the Peñasquito mine in Zacatecas, due to an illegal blockade lasting for more than a month now. More than 300 mine employees protested outside the Zacatecas Congress, accusing José Narro, senator by Morena (the president’s party) of instigating the blockade. Drill core from La Xora project in Nayarit was added to The Mexican Core Shack. ON EXPLORATION, Nine companies presented advances in the exploration of their properties: In Baja, One World Lithium has received the permits to drill its Salar Del Diablo property. In Sonora, Sonoro Metals disclosed assays for the first 15 RC holes of the second drilling campaign; Ridgestone updated the work done to date at Rebeico; Minaurum staked a large chunk of ground at its Alamos project. In Chihuahua, Silver Spruce released surface sample results from its Pino de Plata project; Radius Gold released exciting results from the first hole of the second drilling campaign at Amalia; Kootenay Silver has initiated drill road construction for its incoming campaign at Columba. In Jalisco, GoGold released results from its drilling campaign at Los Ricos. In Zacatecas, Alien Gold updated on the exploration effort at its Donovan 2 property. ON MINING, nine companies presented its first quarter 2019 results, while one company presented its 2018 results. ON FINANCING, First Mining, and Prize Mining are to raise $6 M and $1.5 M respectively. Leagold Mining secured a 200 M term loan and a 200 M revolving credit. ON RESOURCES AND DEVELOPMENT, no relevant news.  ON DEALS AND CORPORATE ISSUES, Alio Gold received notice of a civil claim from a former Rye Patch shareholder.

On the image below, quartz-chalcopyrite veinlet hosted by an intrusive rock in core from a project in Michoacan. Picture by Jorge Cirett.

Content like what you have just read can beseen at https://gambusinoprospector.com/ and at LinkedIn’s Mexico Mineral Exploration Group.

On the image above, plagioclase lined epidote patches and veinlets in andesitic volcanic rocks in  Jalisco. Picture by Jorge Cirett.

During the 36th week of the year (September 3rd to September 9th, 2018), at least 18 press releases were announced by companies working in Mexico. Prize Mining, Minaurum, Azure, and Kootenay released advances in exploration. Telson Mining released some clarifications to its operating Q2 2018 results. Prospero reported news on financing. Goldplay, Consolidated Zinc, Torex, Southern Silver, Impact Silver, Magellan Gold, and Aura Minerals reported on development of its properties. Golden Minerals, Sonoro and GoGold reported deals on properties or royalties. ON MEXICO ISSUES, AMLO announced cabinet posts in Economy, including the new Sub-secretary of Mining, Francisco Quiroga. The Mexican Core Shack now counts with displays from three properties in Chihuahua, two in Durango, two in Estado de Mexico, one in Guerrero and one in Puebla. ON EXPLORATION, In Sonora, Minaurum has resumed drilling at its Alamos Silver property. Azure reported high-grade surface results from its Oso Negro property and Kootenay released surface sampling results from its Malé project. In Coahuila Prize Mining announced a coming drill campaign on its Manto Negro project.  ON MINING Telson Mining presented some clarifications on its Q2 report, and some figures on production costs from the Campo Morado mine.  ON FINANCING, Prospero Silver announced a strategic investment by Fortuna Silver for US$270 K. ON RESOURCES AND DEVELOPMENT, Goldplay released results from its San Marcial project in Sinaloa. Consolidated Zinc is to start mining in Plomosas, Chihuahua. Torex presented an updated technical report and a new mine plan on its El Limon-Guajes property in Guerrero. Southern Silver presented assay results from drilling at its Cerro Las Minitas property in Durango. Impact Silver announced the discovery of a new ore shoot on its Zacualpan property in Estado de Mexico. Magellan is planning to mine on its El Dorado property in Nayarit. Aura Minerals filed a FS and technical report on the restarting of its Aranzazu mine in Zacatecas. ON DEALS AND CORPORATE ISSUES, Golden Minerals sold its remaining interest on the Celaya property in Guanajuato to The Electrum Group for US$3 M. Sonoro optioned an inner concession within its Cerro Caliche property for US$100 K in two payments. GoGold sold its 2% NSR on the Santa Gertrudis project in Sonora to Metalla Royalty.

On the image above, argillitized volcanic rocks above the famous Vizcaína vein in the Pachuca District, Hidalgo. Picture by Jorge Cirett.

Information and core photos from Almaden’s Ixtaca project in Puebla have been added to the Mexican Core Shack at:  https://gambusinoprospector.com/mexican-core-shack/puebla/ixtaca/ 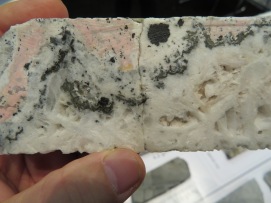