In the next figure you can see how in Gambusino Prospector we think the mining regions of Mexico can be divided. We took into account the topography, the mining culture, the geologic framework and even security to draw the border of the different regions. Of course, it is always a subjective exercise, given the large areas and diversity of factors, but we believe it is a good approximation to reality. 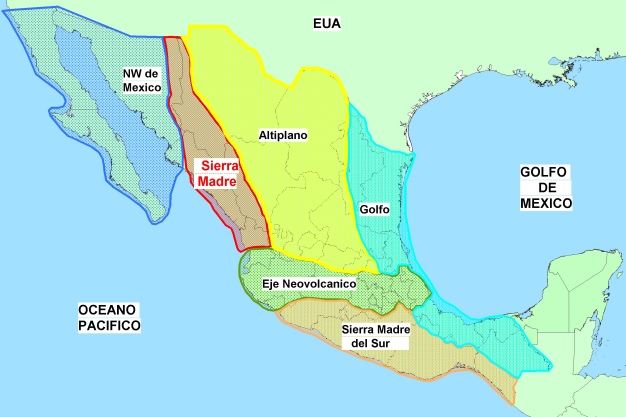 Sierra Madre. Covering the high Sierra and Barrancas of Sonora, Chihuahua, Sinaloa, Nayarit and Durango, and extended to the coastal Sinaloa plains, the Sierra Madre is known for its mineral endowment since times past. It encompasses a territory of mostly rugged terrain, with flat high mesas and deep barrancas, straddling for 1,150 km in a NNW direction, with a width which varies from 90 km in northern Sonora to 250 km in Sinaloa – Durango. This is one of the most mining friendly regions of the country, although the remoteness means some areas pose security issues from time to time. The Sierra Madre hosts the giant Metates disseminated gold deposit, as well as the Orysivo, Mulatos  and La India high sulfidation deposits. Pinos Altos, Dolores, San Miguel, Ocampo and San Dimas are good representations of low sulfidation epithermal deposits, whereas La Cienega, and San Julian are examples of intermediate sulfidation epithermal affinity. Santo Tomas and Bahuerachi are good sized porphyry copper systems, and skarns are represented by Bolivar and Nuestra Señora.

Altiplano. The Central Mexican Plateau, also known as the Mexican Altiplano is a large arid-to-semiarid plateau that contains numerous valleys originally formed by ancient lakes bordered by ranges. It extends from the United States border in the north to the Trans-Mexican Volcanic Belt in the south, bounded to the west by the Sierra Madre. It occupies much of northern and central Mexico, extending across the states of Chihuahua, Coahuila, Nuevo Leon, Durango, Zacatecas, San Luis Potosi, Jalisco, Aguascalientes, Guanajuato, Queretaro and Hidalgo.  The Altiplano Region has a long mining history that spans more than 500 years. It hosts some world class deposits of low to intermediate sulfidation epithermal affinity, such as Guanajuato, Zacatecas, Fresnillo,  Juanicipio, Saucito, Peñasquito, Camino Rojo, as well as the CRD deposits of  Santa Eulalia, Santa Barbara, whereas Naica, Charcas, La Paz, and Sabinas-San Martin are good examples of skarn deposits, as Cerro del Gallo and Aranzazu are for Porphyry Copper deposits. The Mexican Altiplano also contains the large VMS deposit of San Nicolas, the SEDEX deposit of Francisco I. Madero, the stratiform Copper deposit of Samalayuca, and the MVT deposit of Sierra Mojada. It is one of the safest and  friendliest to mining regions in the country.

Eje Neovolcanico. The Trans-Mexican Volcanic Belt is an E-W trending Neogene and still active continental volcanic arc, that extends in a belt over 1,000 km long by 80-230 km wide, from the Pacific Ocean in the West to the Gulf of Mexico in the East, across the states of Nayarit, Jalisco, Colima, Michoacan, Guanajuato, Queretaro, Estado de Mexico, DF, Hidalgo, Morelos, Puebla, Tlaxcala and Veracruz. The topography is characterized by valleys and lakes bounded by volcanoes. It hosts the tallest peaks in Mexico, (> 5,000 m high), several of which present year long snow-capped summits. The Trans-Mexican Volcanic Belt is host to the giant low sulfidation epithermal deposits of El Oro-Tlalpuhajua, Pachuca and Ixtaca, as well as the La Verde and Tepal porphyry copper deposits. La Verde and Tepal are good examples of porphyry copper deposits, whereas Caballo Blanco is a very good example of a high sulfidation epithermal deposit associated to a porphyry center not far off.

Sierra Madre del Sur. Covering the states of Michoacan, Guerrero, Mexico, Morelos, Puebla, Oaxaca and Chiapas, the Sierra Madre del Sur encompasses one of the most complex geology of the country; at the same time being the most challenging Mining Region of Mexico. Community relationship work is paramount in this region to enhance the chances of keeping a smooth time line in any project, and security issues are a problem in some areas. The recently discovered Guerrero Gold Belt has attracted the attention of many mining companies on the Sierra Madre del Sur Region, hosting the  gold skarns of Nukay-Mezcala, Limón-Los Guajes, Media Luna and Cerro Jumil. Other deposit types include VMS, represented by Tizapa, Rey de Plata and Campo Morado; low sulfidation epithermal deposits like El Aguila and San Jose; orogenic gold deposits, as Natividad and Inguaran as an example of porphyry copper deposits.

Golfo. Covering the Gulf of Mexico coastal plains and part of the Sierra Madre Oriental, this region extends some 1,500 km from Tamaulipas and Nuevo Leon (on the USA border) through, Veracruz, Tabasco and Chiapas on the south. It is characterized mostly by flat and gentle topography in most of the region, with the exception of Chiapas and the Sierra Madre Oriental where the relief is abrupt. The eastern Mexican alkali province is mostly within the Gulf of Mexico coastal plains but its northern fringe crosses the Altiplano region in Coahuila and  and continues to Texas-USA. Although this region is more famous for oil and gas, it hosts the porphyry copper-gold deposit of Ixhuatán in Chiapas State.

One thought on “Mining Regions”