This map edited in October 2008 covers > 95% of Mexico´s continental area and shows the total magnetic field recorded from airplanes flying at an altitude of 300-450m, over survey lines of 800-1,000m apart by the Geological Service of Mexico (SGM).

The magnetic data sets or maps help to delineate magnetic unit boundaries and structures, outline distinctive magnetic signatures and establish the tectonic framework. These also allow visualization of the geological structure of the upper crust in the subsurface, particularly to determine the geometry and depth of covered geological structures including uplifts, subsiding basins, faults, folds, igneous intrusions and salt diapirs due to their unique density and magnetic susceptibility signatures compared to the surrounding rocks.

Aeromagnetic surveys are widely used to aid in the production of geological maps, and are commonly used during mineral exploration, especially in areas of poor exposure. They can be used in defining magnetic anomalies which represent ore (direct detection), or in some cases gangue minerals associated with ore deposits (indirect or inferential detection). They also help to identify prospective host rock, structures and direct or indirect signatures possibly related to mineralization.

Magnetics, as explained above, can be used in several ways.  For Gambusino Prospector it is a useful tool for mining resource exploration.

Magnetic images have several uses on mineral exploration, either for trying to elucidate the lithologic units under cover, or to locate orebodies by it’s magnetic properties. The next figure shows the total magnetic intensity (TMI) of part of northern Sonora, in the magnetic image for Sonora by SGM. The magnetite destruction by alteration is likely to have formed the clear magnetic lows (blue shades) where these two huge deposits are; this phenomenon is extensively used in the search for porphyry copper deposits. 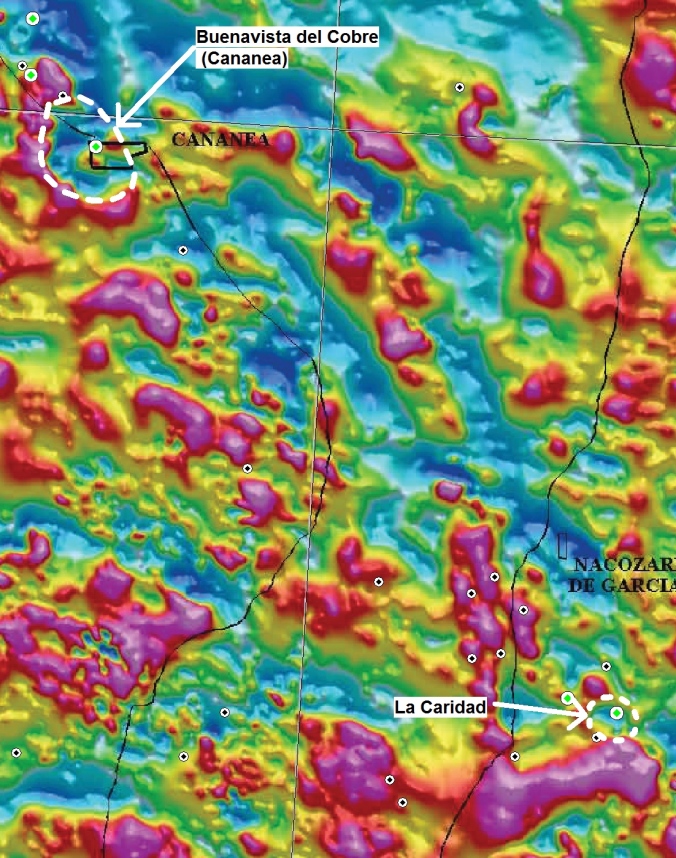