VANCOUVER, BC–(Marketwired – March 31, 2016) –  Almaden Minerals Ltd. (“Almaden” or “the Company”) (TSX: AMM) (NYSE MKT: AAU) announces that its Form 20-F for the fiscal year ended December 31, 2015 has been filed with the U.S. Securities and Exchange Commission. The Form 20-F and the Company’s audited consolidated financial statements for the years ended December 31, 2015 and 2014, are available on the Company’s website at http://www.almadenminerals.com.

March 30th, 2016, Vancouver, BC, Canada – ALIX RESOURCES CORP. (“Alix” or the “Company”) (AIX-TSX:V) (37N–FRANKFURT) announces that it is increasing the non-brokered private placement announced on February 10th, 2016 from four million units (“Units”) to ten million units at a price of $0.05 per Unit for aggregate gross proceeds of $500,000 (the “Offering”).  Each Unit will be comprised of one common share (“Share”) and one Share purchase warrant of the Company (a “Warrant”).  Each Warrant entitles the holder to purchase an additional Share at a price of $0.075 per Share for a period of 12 months. Proceeds from the Offering will be used for general working capital and to advance the Company’s Lithium concessions located in Sonora, Mexico.

TORONTO, ON–(Marketwired – March 31, 2016) – Excellon Resources Inc. (TSX: EXN) (OTC: EXLLF) (“Excellon” or the “Company”), Mexico’s highest grade silver producer, is pleased to announce a non-brokered equity private placement (“the Financing”) in the Company by Eric Sprott for gross proceeds of C$3,000,000 through the issuance of 6,666,667 units (each a “Unit”) at a price of $0.45 per unit. Each Unit will consist of one common share and one half-share purchase warrant of the Company (“Warrant”). Each full Warrant will entitle the holder to purchase one additional common share of the Company at a price of $0.65 per share for a period of 24 months from the closing date.

VANCOUVER, BRITISH COLUMBIA–(Marketwired – March 31, 2016) – Southern Silver Exploration Corp. (TSX VENTURE:SSV)(FRANKFURT:SEG1)(SSE:SSVCL) (“Southern Silver”) continues to advance the Cerro Las Minitas project with the approval of a 2016 Phase I Exploration Budget and receipt of US$750,000 in funding from Electrum Global Holdings L.P. (“Electrum”), which is financing a broad range of exploration activities to earn a 60% interest in the project. Crew mobilization is underway with work on the property expected to begin in the first week of April.

FIRST MAJESTIC SILVER CORP. (the “Company” or “First Majestic”) is pleased to announce its 2015 Mineral Reserve and Resource estimates for its existing mineral property assets in Mexico as of December 31, 2015. Metal prices used to estimate the 2015 reserve estimates were reduced compared to previous estimates to: $17.50/oz for silver, $1,200/oz for gold, $0.85/lb for lead and $0.85/lb for zinc.

The Sierra Madre region is known for its extensive volcanic cover, same that was developed between the Cretaceous and Miocene, but often it is not taken into account that its basement consists of four different stratotectonic terranes, namely North America, Caborca, Cortes and Guerrero (see figure). According to Centeno-Garcia (2008, 2011), the North America terrane is defined by the crystalline complexes of Grenvillian age. The Caborca terrane ​​has a Proterozoic basement older than 1.7 Ga, covered by a thick sedimentary succession which has been interpreted as a displaced Nevada miogeosinclinal block, transported southwards through the proposed Mohave-Sonora megashear. The Cortes terrane is interpreted as native to North America, same that probably evolved outward the Caborca terrane (Stewart et al., 1990), with its sedimentary units interpreted as deposits on the slope of the continental margin. These deformed Paleozoic rocks are overlain by Triassic marine and continental sedimentary rocks. In turn, the Triassic rocks are overlain by red beds and Cretaceous volcanic rocks. Contact relations between Cortes and the composite Guerrero terrane have not been well defined, but the contact is inferred as a Late Cretaceous thrust. The Guerrero terrane is composed by at least five sub-terranes, of which only the Tahue sub-terrane lies within the Sierra Madre Region. This sub-terrane hosts the oldest rocks of the Guerrero terrane, with Ordovician age submarine arc volcanic rocks and late Paleozoic siliciclastic turbidites. These rocks are covered or intruded by volcanic rocks of the lower Jurassic and lower to late Cretaceous. 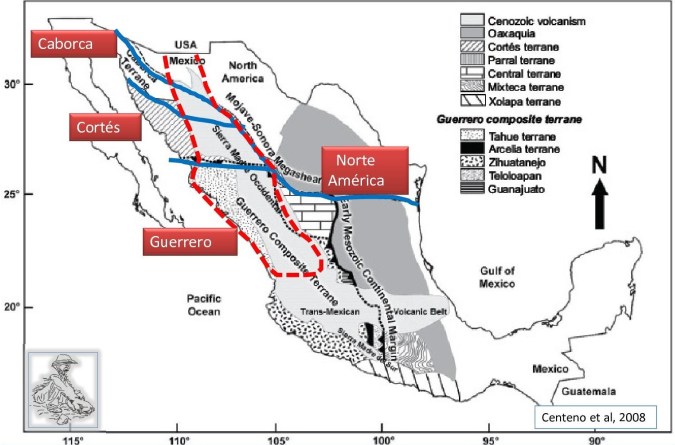 The existence of a Triassic-Jurassic magmatic arc is established by isolated outcrops of clastic sediments interbedded with volcanic rocks, besides the presence of several intrusive bodies from northern Sonora to the south of Chihuahua and north of Durango. The presence of a magmatic arc of Cretaceous to Eocene age has been in the literature of the Sierra Madre Occidental for more than 30 years, starting with the proposal by McDowell and Keizer (1977) of the Lower Volcanic Complex, later changed to Lower Volcanic Group . This group is composed of large diorite and quartz-diorite batholiths, alkaline granites (Valencia-Moreno et al., 2001) and by volcanic sequence with a predominantly andesitic composition. This volcanic sequence has a top member of dacitic and rhyodacitic tuffs, intercalated with sedimentary rocks. More recently the age of this arc has been constrained between the Early-Late Cretaceous to the Paleocene, while the Eocene magmatism has been assigned to another magmatic arc (L. Ferrari, 2005). In the northern part of the Sierra Madre Occidental, the magmatic arc’s volcanism is mainly exposed in the deepest canyons of western Chihuahua. This episode begins 46 Ma ago, but its first pulses are difficult to distinguish from the more felsic upper member of the Cretaceous-Paleocene arc.

At the beginning of the Oligocene, and with surprising synchrony, the first and most extensive ignimbrite pulse occurred; within a period of three million years that led to deposition of more than one kilometer thickness of ignimbrite layers in the heart of the Sierra Madre (see picture below, near Batopilas, Chihuahua). A second pulse occurred in the Early Miocene, although it was more important at the southern end of the Sierra Madre Occidental. These two pulses created one of the largest volcanic provinces in the world, with an average width of 250 kilometers and a length of 1,200 kilometers. Basaltic to andesitic composition flows of Miocene age crown many mountaintops of the Sierra Madre Occidental.

VANCOUVER, BRITISH COLUMBIA–(Marketwired – March 30, 2016) – Timmins Gold Corp. (TSX:TMM)(NYSE MKT:TGD) (“Timmins” or the “Company”) is pleased to announce an updated National Instrument 43-101 Technical Report for its San Francisco Gold Mine in the state of Sonora, Mexico, prepared by Micon International Limited (Micon). The San Francisco Gold Mine (“the Mine”) is comprised of the San Francisco deposit (“SF”) and the La Chicharra (“LC”) deposit. The report was previously updated as of December 15, 2013. This update incorporates production depletion from the date of the last report, production / confirmation drilling and an update to the resource and reserve assumptions, primarily a lower gold price assumption (Reserves at $1,100/oz gold, Resources at $1,200/oz gold). The update also includes a maiden resource for the San Francisco underground. All figures quoted below are in US Dollars.