The recently completed drilling campaign began in May 2016 and was carried out on one of the principal vein structures in the district, the Cinco Estrellas vein, over a strike length of 2.2 km. Drilling tested down-dip extensions of known vein mineralization, below existing workings, as well as the possibility of previously unknown veins parallel to the principal vein.

VANCOUVER, Oct. 31, 2016 /PRNewswire/ – Kootenay Silver Inc.  (TSXV: KTN) (the “Company” or “Kootenay”) is pleased to report 11 core drill holes totaling 2,100 meters have been completed and submitted for assaying on the Ram Zone as part of its initial 3,000 meter drill program on its 100% owned La Cigarra silver project (the “Property”), located in Chihuahua State, Mexico. The 11 holes tested the northern 500 meters of strike on the Ram structure. Management believes the RAM target has potential to host high-grade silver mineralization within a large structurally controlled anomalous silver trend measuring 3.8 kilometers in length.  Assay results will be released once received and compiled.

The Company further reports it is currently mobilizing the drill rig to the La Soledad Zone, located approximately 1,000 meters south of the La Cigarra silver resource.

VANCOUVER, Oct. 31, 2016 – Canasil Resources Inc. – (TSX-V: CLZ ) (“Canasil” or the “Company”) is pleased to report that Orex Minerals Inc. (TSX-V: REX, “Orex”) has announced a first resource estimate for the Boleras Silver Deposit on the Sandra-Escobar Project in Durango, Mexico, prepared by the consulting firm Mining Plus. The project is being advanced by Orex under an option agreement with Canasil announced on September 15, 2015.

TORONTO, ONTARIO–(Marketwired – Oct. 31, 2016) – Torex Gold Resources Inc. (the “Company” or “Torex”) (TSX:TXG) regretfully announces that an accident occurred at its Guajes pit on the afternoon of October 28th in which Mr. Jose Manuel Martinez Martinez, an employee of Equipos y Maquinarias del Sureste S.A de C.V, was seriously injured by falling rock. The mine’s emergency response team transported Mr. Martinez to the hospital in Iguala where, despite the best efforts by the hospital medical staff, he passed away during surgery.

Fred Stanford, President & CEO of Torex stated: “Our thoughts, prayers, and support, are with Jose Manuel’s family through the difficult days ahead. Support for employees has also been provided. All mining activities were suspended during the internal investigations, and the area of the rock slide remains secured until corrective actions can be designed and completed.”

The 2016 metallurgical test work has focused on continued optimization of the gravity and flotation concentration circuits, and of leach reagent consumption rates. Results reported today are consistent with the Amended Preliminary Economic Assessment (PEA) overall recovery projections of 90% gold and 90% silver for the limestone domain (see January 22nd, 2016 press release). The limestone domain represents approximately 90% of the total metal produced under the Amended PEA.

CARSON CITY, Nev., Oct. 31, 2016 (GLOBE NEWSWIRE) — Mexus Gold US (OTCQB:MXSG) (“Mexus” or the “Company”) President Paul Thompson
stated today that the startup of production at the Santa Elena mine will not occur in October as previously stated.  This change in timeline is due to unforeseen issues with the import of certain materials as well as the already documented weather issues.   CEO Thompson added, “The move of our production start date should not alarm investors.  We expect to issue a release on production soon.   I ask for your patience as we complete the initial steps in what will be a long term and profitable mine for the company.”

Avino Silver & Gold Mines Ltd. (ASM: TSX-V, ASM: NYSE-MKT; “Avino” or “the Company”) plans to announce its Third Quarter 2016 financial results after the market closes on Wednesday, November 9, 2016. In addition, the Company will be holding a conference call for analysts and investors on Thursday, November 10, 2016 at 8:00 am Pacific Standard Time (11:00 a.m. Eastern Standard Time) to review the results.

Vancouver, BC – Orex Minerals Inc. – (TSX-V: REX – OTCQX: ORMNF) (“Orex”), is pleased to announce that a first resource estimate for the Boleras Silver Deposit on the Sandra Escobar Project in Durango, Mexico, has been prepared by the consulting firm Mining Plus. The Sandra Escobar Project is being advanced by Orex under an option agreement with Canasil Resources Inc. – (TSX.V: CLZ) (“Canasil”). At a “Base Case” of 45 g/t Ag cut-off, the Inferred Resource Estimate yields 9.8 million tonnes grading 106 g/t Ag for a total of 33.3 million ounces of silver.

During the fourth week of October, at least 25 press releases were published by companies working in Mexico, including eight third quarter production releases. ON MEXICO NUMBERS AND NEWS Mexico’s mining sector is to reach $17.8 billion by 2020, backed by Ag, Zn prices. Gold, copper and silver represent 31%, 19% and 17% respectively of the value (%) by commodity in 2016. ON EXPLORATION, nine companies reported exploration updates on their properties, which include drilling results from properties in Jalisco (2), Veracruz, Sonora, Chihuahua and Durango, as well as the announcement of incoming drilling programs in Sonora and Durango. A company released exploration updates for its projects in Hidalgo, Durango and Chihuahua. ON MINING, nine companies reported third quarter production results for its operations in Aguascalientes, Sonora, Sinaloa, Chihuahua, Durango, Zacatecas, San Luis Potosi, Guerrero and Oaxaca. ON FINANCING, one company opened a non-brokered private placement of up to $300 K, augmenting it later on the week to $400 k. ON DEALS AND CORPORATE ISSUES, two companies announced a binding agreement on a tailings project in Durango, two others a definitive agreement on an exploration property in Chihuahua.

ON MEXICO NUMBERS AND NEWS

On the picture below, breccia development in fine grained marbleized limestone at La Morena project, Coahuila. 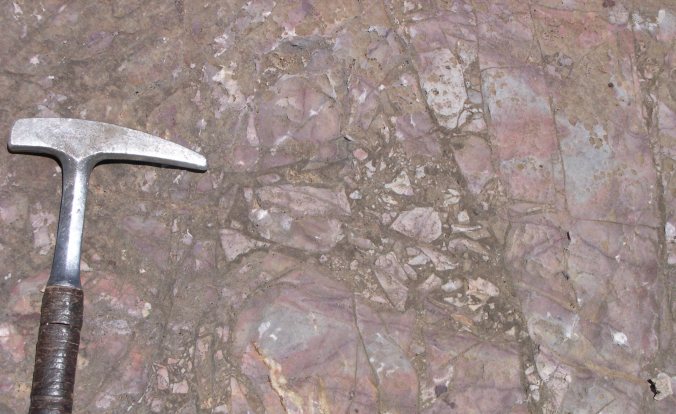